December 1st marks World AIDS Day, it also marks the beginning of Aboriginal AIDS Awareness Week. World AIDS Day is an opportunity to show support for people living with and affected by HIV and to pay tribute to those we have lost to AIDS-related illnesses.

Read Monica’s story below to learn why World AIDS Day is important to her. Find out more about this event here. 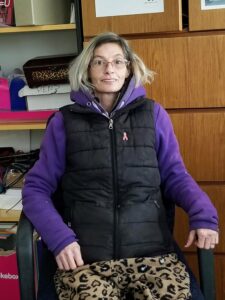 Monica is a spunky 45-year-old woman with two children who loves to sing karaoke. She has been living with HIV for over 25 years and is an active and much-loved member of the community at HIV Community Link.

“I lost some friends, but I have had some that have stuck with me through it all.”

Monica’s first child was just a newborn when both she and her husband, Sandy, got diagnosed with HIV, an illness they would find out later that they had acquired from tattoos done in a friend’s basement. Concern for the health of the baby was met with relief when they learned that the baby was not also HIV positive. “He was my miracle baby,” says Monica. Monica describes the struggle of dealing with her diagnosis, “Going through something like this you really find out who your real friends are. I lost some friends, but I have had some that have stuck with me through it all.” She found support in the people around her and was able to move forward.

In 1999, Sandy’s health started to decline. He was admitted to the hospital, while Monica stayed home with their six-year-old son. When Sandy returned, he shared the devastating news that he had only three to six months to live. They decided to live their remaining time together in the best way they could. Monica cared for Sandy as he became more unwell, while also taking care of their young son. She remembers the support of her sister: “She would come by to help me get some rest. She would tell me to go for a walk, a bath, a nap, whatever would help.”

After caring for him at home, Monica made the difficult decision to have Sandy admitted back into the hospital. Then, as his condition worsened, he went into hospice care. Monica makes note of the compassionate care her family received there. She was grateful when the nurses helped explain death to her son, “I remember him telling my sister, ‘My Daddy’s going to be an angel’”. On February 28th, 2000, Sandy passed away with Monica and his family by his side. “When he passed away, the song Angels Among Us came on the radio and we took it as a sign that everything was going to be okay.”

“I would rather you come ask questions than discriminate just because of my disease.”

Grieving the death of her husband, Monica grappled with depression. It was at this time that she first came to HIV Community Link, “If it wasn’t for the agency, I don’t know where I would have been. I was struggling at that time, being a single mom. I thought it was a great opportunity, so I came in and everyone was great.” In the year 2000, Monica and her son participated in their first AIDS Walk and as part of her volunteer work, she started sharing her story at high schools. Through telling her story, she was able to connect with many people, “I remember people coming up to me and telling me I changed how they thought about HIV”. 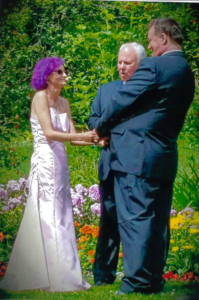 Eventually, after a couple of years, Monica decided to try dating again. She recalls a conversation she and Sandy had before his death: “I said that if I went first, I would want him to be happy, and he said the same for me.” After the first relationship she entered ended poorly, she thought that she would be alone. “I thought that nobody wanted me because I was HIV positive”. Then she met her second husband, Andy, in a chat room online.  Andy supported her when another member outed her HIV status(?) in the chat. She says after that, they “hit it off”. After 6 months, Monica and Andy decided they wanted to be together. Andy moved to Calgary shortly afterward, and 17 years later they are still together. Monica and Andy had her second child, another son, in 2003, and 2016 they were married.

While living with HIV, Monica shares moments in her life when she experienced stigma around her disease. Monica loves karaoke, but when the staff and patrons of her favourite karaoke bar found out about her status, things changed. “I had a waitress refuse to serve me. I couldn’t understand, I wasn’t any different than I was before, but now they knew this about me”. The patrons would also say hurtful things to her in passing. Monica made the decision to find another place to sing and found an accepting community. In response to those who still discriminate Monica says, “Don’t be afraid to come ask us questions. I’m a very outgoing person. I would rather you come ask questions than discriminate just because of my disease.”

Monica is now in her 19th year of volunteering with the agency in the community. She has been to many schools to talk to students about HIV and has shared her story with many people in the health care system about the needs of people living with the illness. More recently, Monica has become the Peer Navigator in HIV Community Link’s Peer Program. Her role is to support the newly diagnosed, a support that she did not have at the time of her diagnosis, “You can still live a normal life, with the medication that’s out there nowadays, we are living longer. But I know how I felt when I was diagnosed, that part of it people need to see. That they are not alone. For the longest time I thought I was the only person on this earth that had it, until I came to the agency”.

Monica is determined to continue advocating for people living with HIV and help those newly diagnosed through the Peer Program at HIVCL. She has what she needs to keep her going: her 16 and 25-year-old sons, her husband, her friends at the agency and a great karaoke place where she is treated like family.